AWS offers a range of Compute Services and EC2, ECS, and Lambdas are few important services from the Associates Architect exam perspective.  The core of Cloud computing in AWS is EC2 instance, which is like CPU in our personal computer or Server in our on-prem data centre; but, we only pay for the capacity we actually use.  EC2 instance is virtual server in cloud and an Amazon Machine Image (AMI) provides information to launch the instance. AMI includes template (OS, Application Server, and application), launch permissions, and volume (storage) to attach the instance.  We can create and register the configuration (AMI) for launching new instances.  Copy AMI in new regions and launch instances.

Launching the EC2 instance is like assembling your PC but difference is we dont invest anything upfront and it is virtual.  We choose configuration (OS, etc.), Choose Instance type (based on type and size), add storage (hard disk), and configure security rules. Choosing the instance type means choosing among memory optimized, Storage optimized, and so on.  At a minimum we need to choose Type, Size, and AMI:

The steps to launch EC2 instances are: 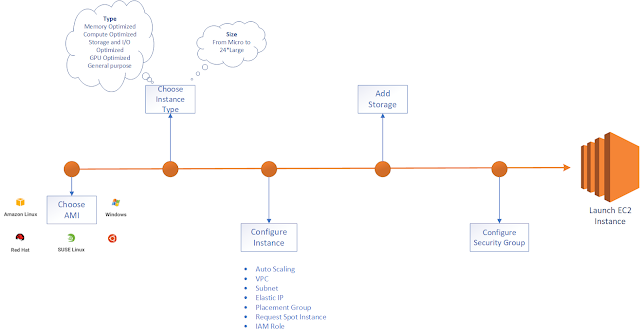 Is a way of storing data in different places on multiple hard disks to protect data in case of drive failure.  Works by placing data on multiple disks and allowing input/output (I/O) operations to overlap in a balanced way, improving performance. Because the use of multiple disks increases the mean time between failures (MTBF), storing data redundantly also increases fault tolerance.  Create EBS volumes with identical size and IOPS performance values for array. Make sure to not create an array that exceeds the available bandwidth of EC2 instance.  Attach the Amazon EBS volumes to the instance that we want to host the array.
Read more different RAIN configurations and differences in AWS here. 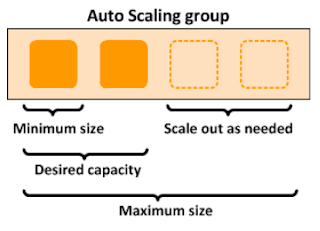 
When you launch a new EC2 instance, the EC2 service attempts to place the instance in such a way that all of your instances are spread out across underlying hardware to minimize correlated failures. You can use placement groups to influence the placement of a group of interdependent instances to meet the needs of your workload.