I visited Varanasi very recently and it was on my grand tour of Asia bucket list.
Varanasi, India (http://en.wikipedia.org/wiki/Varanasi) is considered oldest city of world. Its center of Hindu religion. In hindu religion its called to visit varanasi at least in life. Its holy city for Hindus, Buddhists, and Janis.

Some of the highlights of the city are -
Located on bank of river Ganges (Ganga)
City is full of temples
City is full of Gali's (lane, alley) : very narrow lane with houses on both sides.
Holiest city / Religious capital of India / Kashi / Benaras are other names and known for
Death in Varanasi brings salvation (in Hindu religion)
Sarnath (where Gautam budha first taught dharma )
Food (lot of local and famous food and sweets)
Ghats and River side lifestyle on ghats (especially in the morning when are boating infornt of ghats, you will people taking bath and praying, kids playing cricket on ghats, and lot of hindu saints)

I believe 2 days in Varanasi is good, 3 days will be better. But city is very crowded and lot of chaos with no traffic rules. If you stay more, you might hate it. Its good for photographers - taking pictures of river, ghats, and people. Preferred months to visit is December, January, and February.

Recommended hotel -  There are plenty of hotels but one of  the oldest and class hotel is Taj Ganges.

There are 84 ghats on the bank of river ganga, but most famous is Dasashwamedh ghat is prominent and most famous, second famous could be Manikarnika ghat where dead bodies of hindus are burned. Know more abouts ghats on - http://varanasi.nic.in/

Boating in river or walking on ghats is the most famous activity in Varanasi.
The grand walking tour I can suggest on the ghat can be below -
Ignore the blue line(generated by google) and follow black line and walk along side ghats - 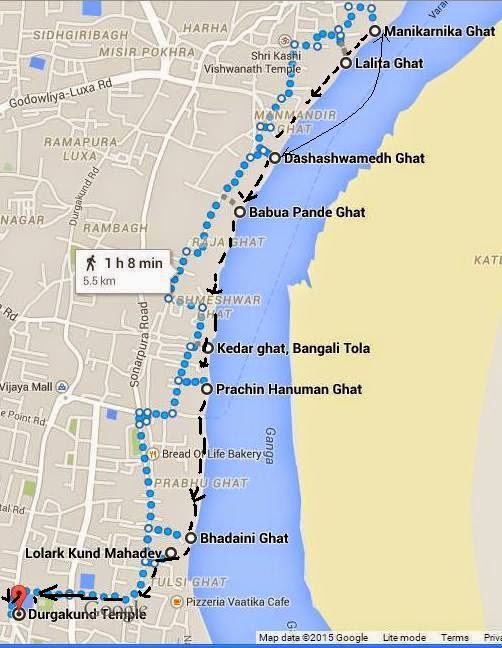 But the grand walking tour is too ambitious. I will prefer you take below one -


All public transports are not allowed beyond Godowlia chowk. So, If are not staying in any guest house on ghats, you will have to leave the transport at chowk and walk for further few hundred meters, if you are targeting to reach Dashashwamedh Ghat (which is the most spectacular ghat). And walk to the Dashashwamedh ghat. From Dashashwamedh ghat, you can walk till manikarnika ghat (which is second most interesting). Otherwise if you reach there in evening, you can take a boat, take boat ride - Boat ride from Dashashwamedh ghat till manikarnika ghat and then come back and watch famous Ganga aarti from boat - I will suggest you take boat at 6 PM enjoy ride till 7 PM, and ask boatman to park boat in front of Dashashwamedh ghat and watch Ganga aarti.
Close to these ghats are very nice restaurants in Gali's like Dosa Cafe and some others close to Dosa cafe;
and also close is world famous Kashi Vishwanath temple (overcrowded).
One more restaurnat very worth visitng i found is Dolphin restaurant (http://www.palaceonriver.com/) 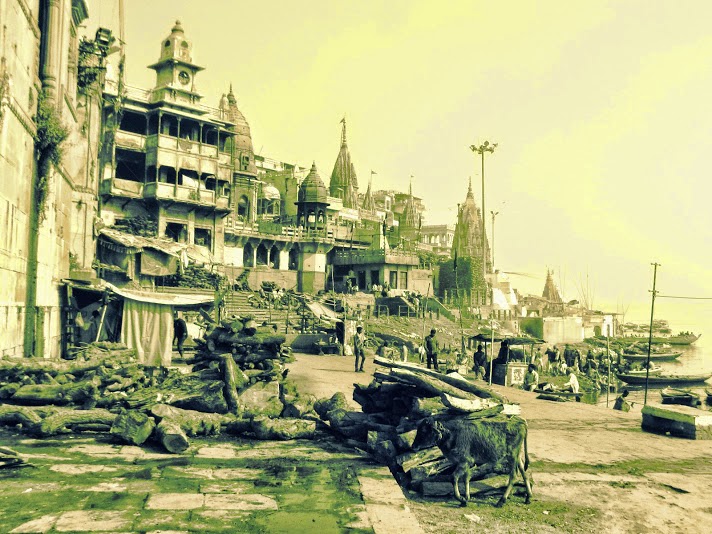 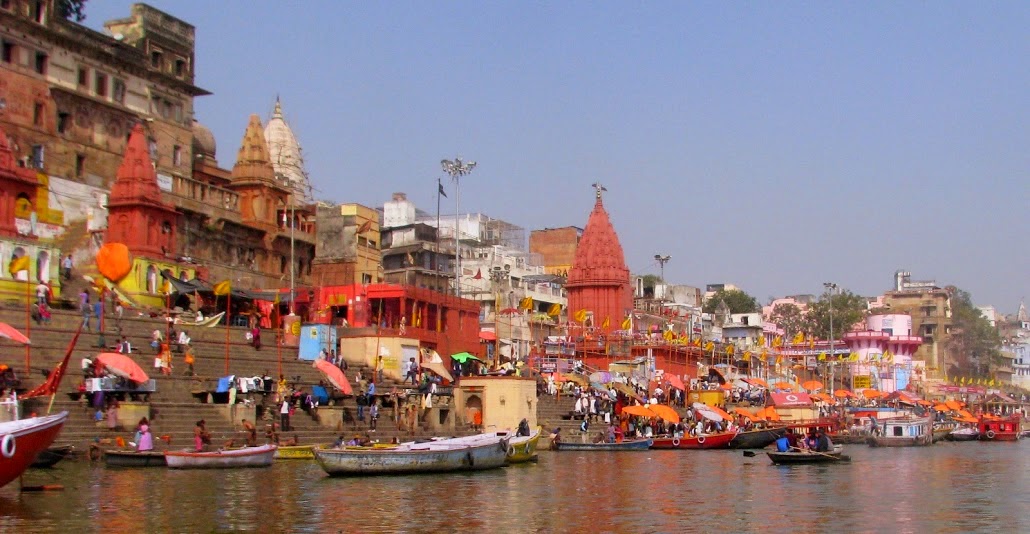